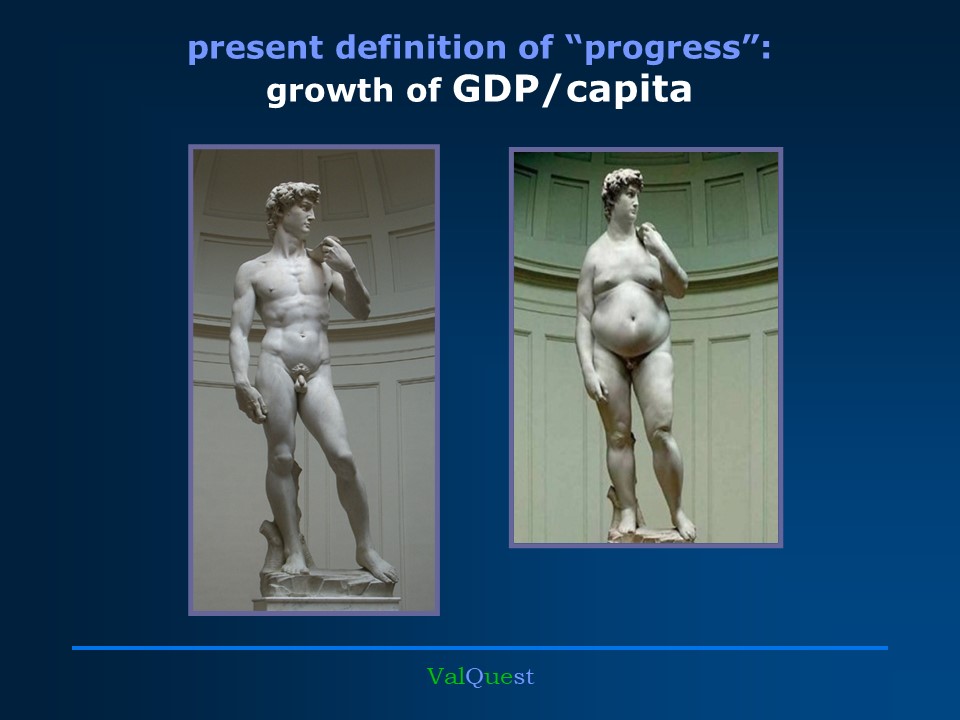 the prevailing definition of progress: a high gross domestic product per head of the population

To this day, “progress” of a country, a society, is defined in terms of its gross domestic product per capita. The higher this amount, the more successfully the country is judged with its culture, political and economic system. But this measurement of prosperity is severely riddled with errors and omissions. In fact, it is a rather bizarre instrument to use as a serious tool to judge the progress and prosperity of a society. 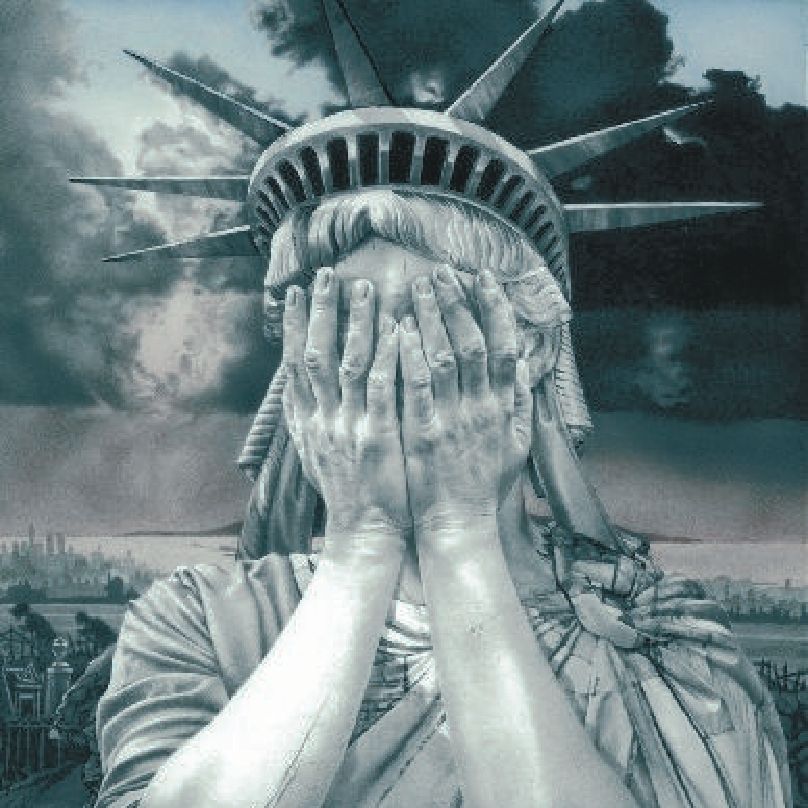 the USA is apparently [within this definition] a very successful society....

This is certainly what Americans themselves think – at least their political leaders, who love to end their speeches with …”God bless America, the greatest country in the world”…

I reviewed the situation in the USA concerning a number of important themes in the section “reflections”, chapter “god bless america”. It will be clear that I cannot call the USA a successful society – quite the contrary. 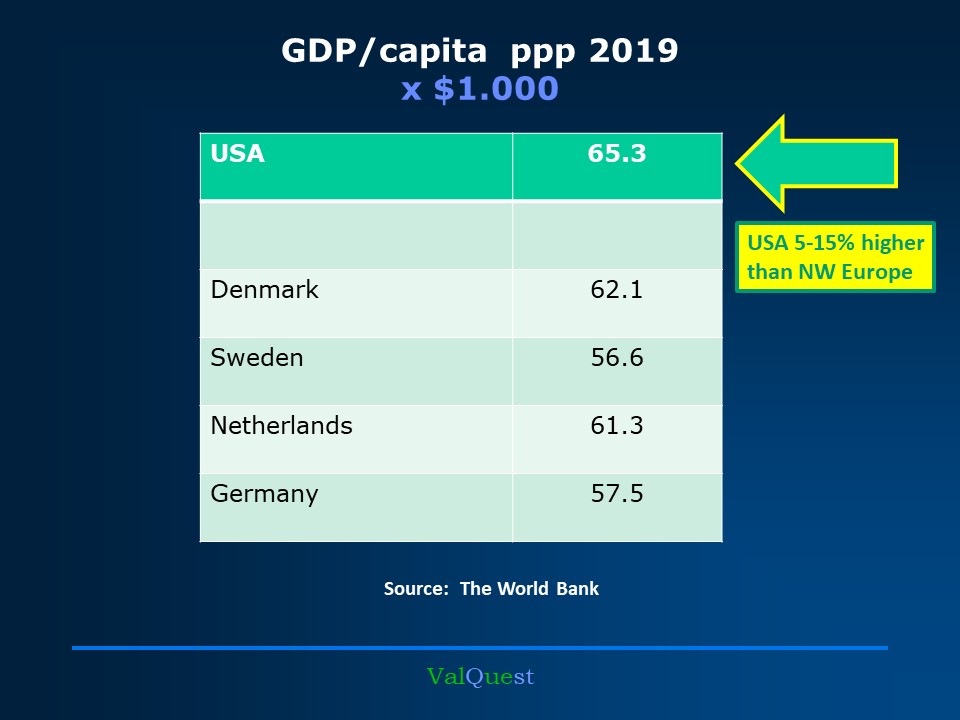 "if you wish to see the American dream, then go to Denmark, or Sweden, or The Netherlands, or..."

Certainly, there are many important issues that need to be improved within Western Europe, but for the quality of life in this rich part of the world, I much rather live here in Belgium than in the USA. 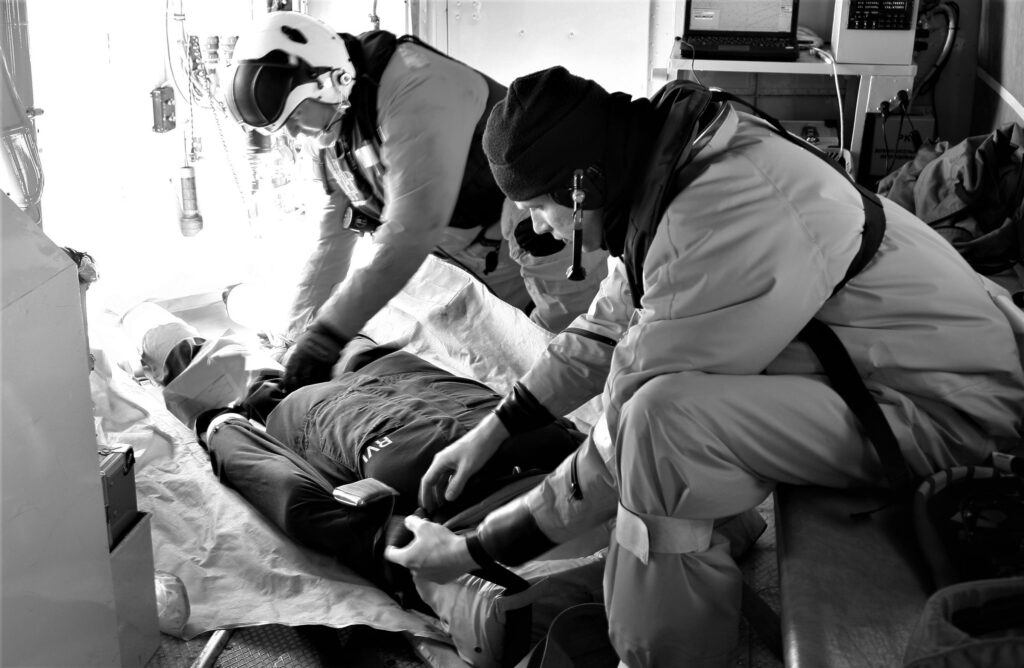 But there are more reasons to use the GDP as a criterion of success that make it rather bizarre. The GDP is composed not only through positive economic activities, but all : the more pollution, the higher the GDP, the more accidents on the highways, the higher the GDP. The more hospital costs because of smoking, the higher the GDP. Napalm production, nuclear warheads, extra police officers that are necessary because of crime increases or social unrest, it all adds to a country´s GDP. 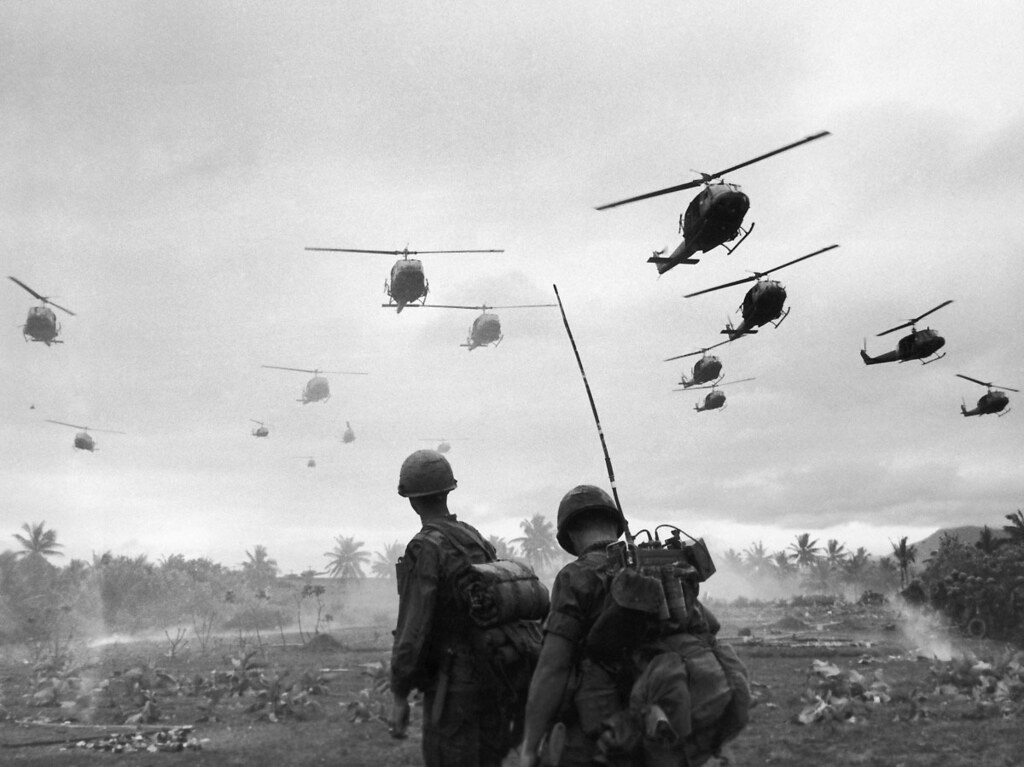 In addition, there are important functions that are fulfilled in a society that is not measured [often because that is not possible either] and therefore do not end up in the GDP. This includes much essential care and social activities that are performed voluntarily. Like all the activities that a parent performs full-time for the family and therefore has chosen not to participate in the economic process. Or elderly care by volunteers. Or all the work done by volunteers for associations. 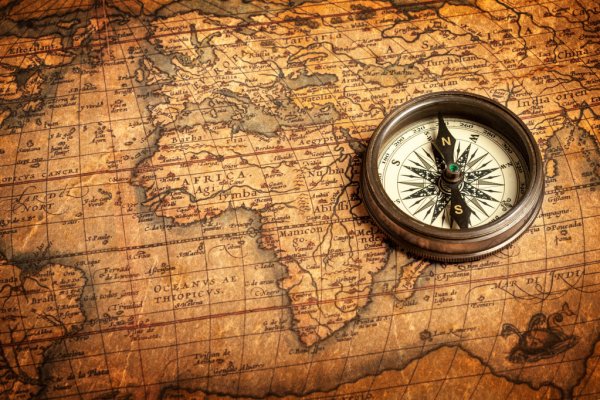 Originally, the present GDP concept was set up to measure war production in the 1940s. Despite a number of adjustments and new calculation methods, it is an unreliable parameter to measure the development of a modern economy, let alone social progress. It is a perfect example of what Alfred North Whitehead once called “the fallacy of misplaced concreteness”. Nevertheless, governments take strategic policy decisions on the basis of GDP calculations.

and his map is also not the latest version…

Obviously, a lot of academic work has been done to arrive at a more intelligent method for measuring progress. As early as the 1970s, a few individual economists were involved in this, including Roefie Hueting in The Netherlands. But certainly also Herman Daly and John Cobb should be mentioned with their Index of Sustainable Economic Welfare, published in 1989. More recent work has been done by economists like Stiglitz, Sen, Fitoussi [“Report by the Commission on the
Measurement of Economic
Performance and Social Progress”] and many others. Important studies and proposals based on this report have further been made by the OECD. In November 2018 “Beyond GDP – Measuring What Counts for Economic and Social Performance” was publised. In my view a milestone event.

Its press release a.o. stated: “Better measurement of the economy and of people’s well-being could have led governments to respond more strongly to mitigate the damage caused by the 2008 financial crisis and reduce people’s continuing loss of trust in public institutions. This dashboard of indicators should encompass the most important dimensions of people’s lives, such as skills, health, jobs and income, as well as economic security, environmental degradation and trust. It should pay attention not just to average outcomes but also to how policies affect each of the segments of society, and give a balanced consideration to well-being today and in the future”. 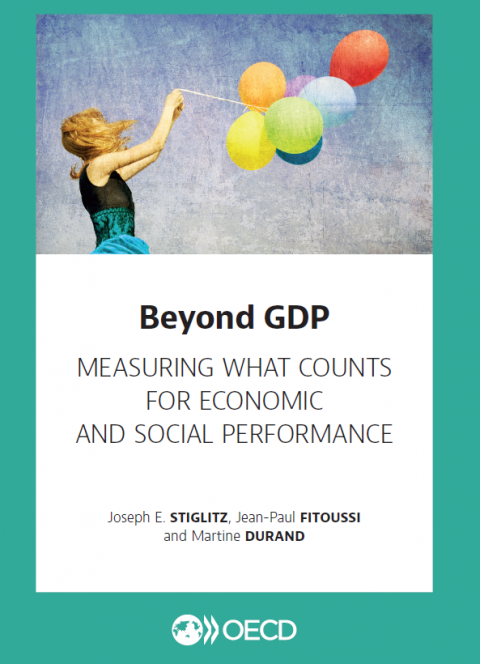 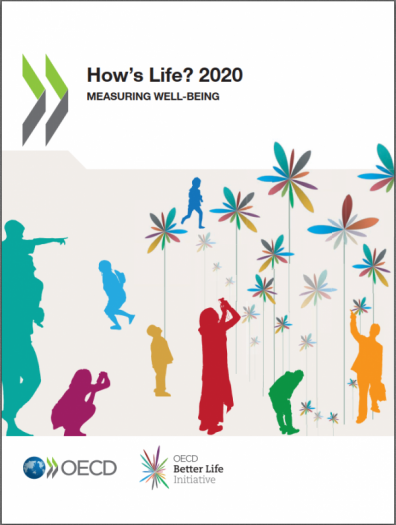 “How’s Life? 2020 charts whether life is getting better for people in 37 OECD countries and 4 partner countries. This fifth edition presents the latest evidence from an updated set of over 80 indicators, covering current well-being outcomes, inequalities, and resources for future well-being. Beyond an overall analysis of well-being trends since 2010, this report explores in detail the 15 dimensions of the OECD Better Life Initiative, including health, subjective well-being, social connections, natural capital, and more, and looks at each country’s performance in dedicated country profiles”.

Below please find an overview of the range of parameters used in the evaluation of “PROGRESS”. 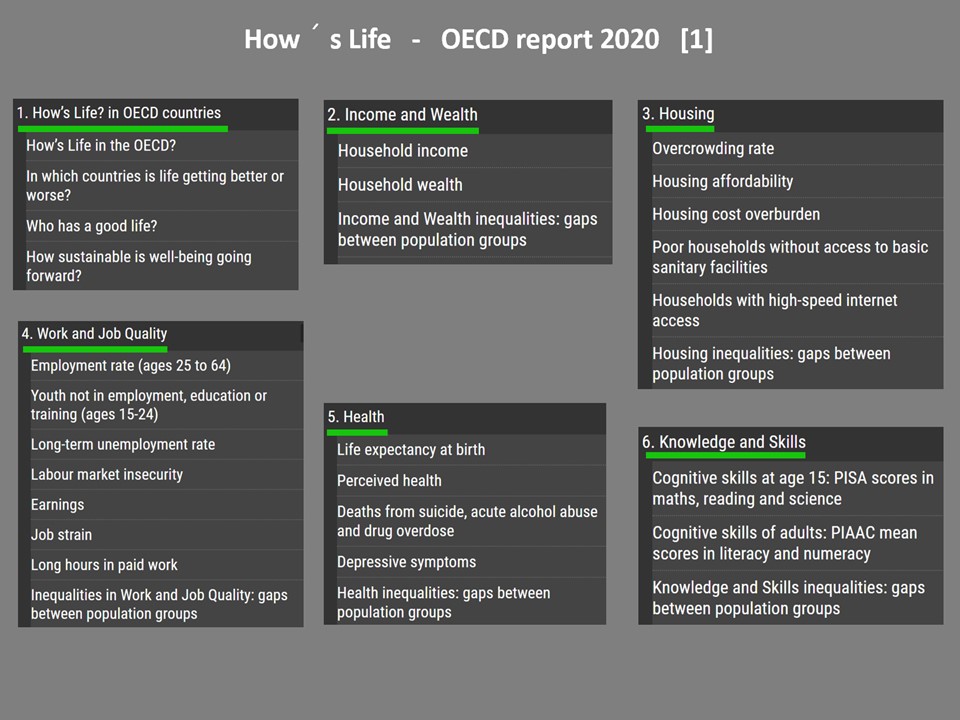 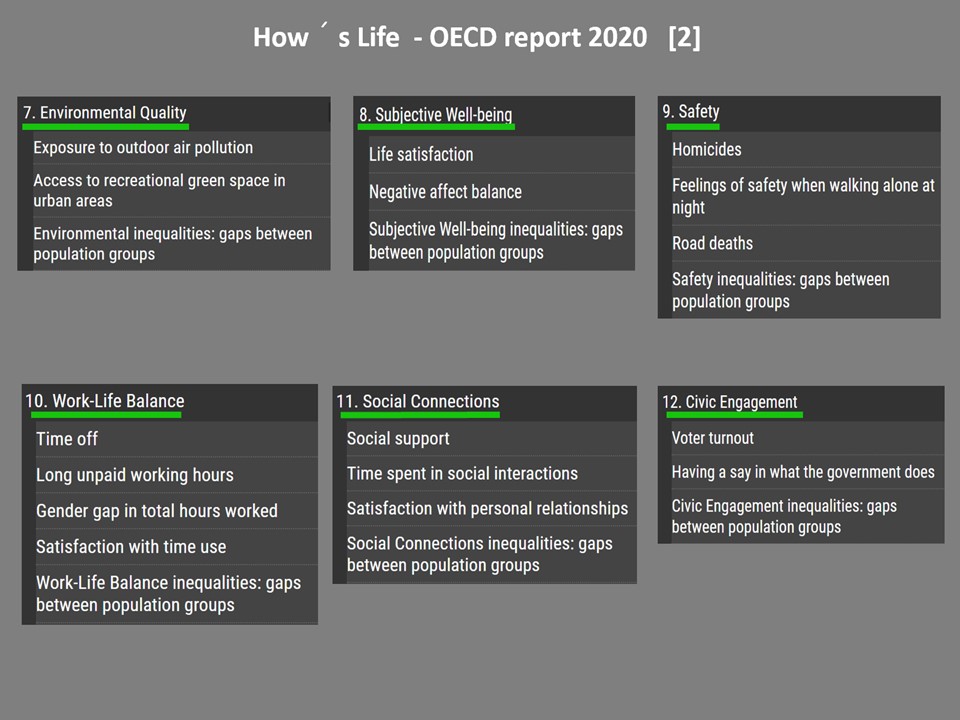 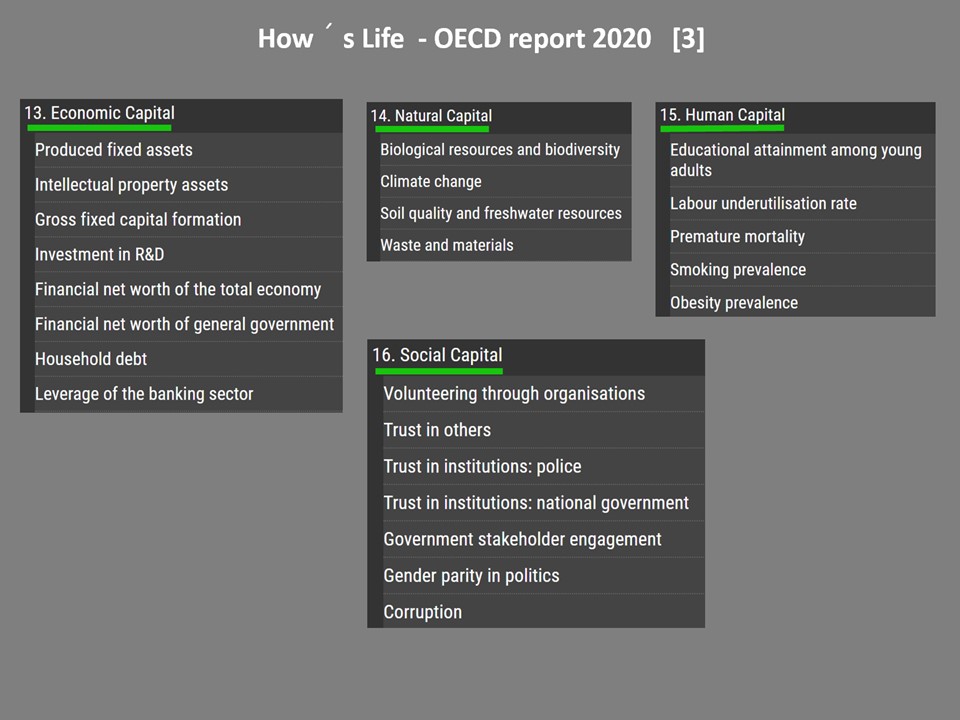 a matter of letting go and getting intelligent

So, the new parameters are there. It is just a matter of letting go of the old one. Easier said than done… It requires less laziness and a changing mindset for the political leaders. 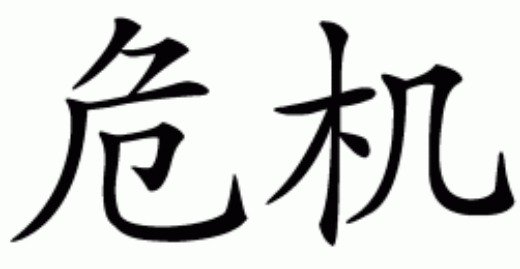 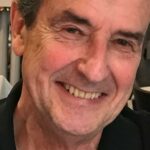